Cork had the better chances early on. Conor Bowden forced Davis into a save after just two minutes. Van Sinderan went close three minutes later, turning a corner from Doyle just wide of the post. Cian Bargacy went close on 11 minutes, cutting in from the left and shooting narrowly wide. 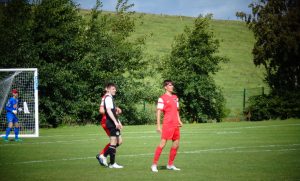 The home side responded when Eoin Darcy played in Daniel Madaghjian on 14 minutes, but, Kelleher was off his line quickly to block the shot and Cork cleared the danger. The visitors took the lead on 31 minutes when Jack O’Sullivan converted from close range from a cross on the left.

The home side responded well. Glen Hollywood fired over from outside the box on 34 minutes and Eoin Darcy almost equalized a minute later but his effort came back off the Cork crossbar.

Conor Bowden missed a great chance for the visitors on 36 minutes when a cross from the left fell to him but he put it wide of the post with only Davis to beat.

The visitors added a second three minutes into the second half when Cian Murphy fired home from the edge of the area. Cian Bargacy fired a Cork free kick off the post on 75 minutes and substitute Daniel Djomo also hit the post for the visitors with two minutes remaining.