The home team had an early chance when Eoin Darcy fired over the bar on four minutes. Three minutes later, Daniel Madaghjian was fouled outside the area on the right. From the resultant free kick Shane Flynn shot straight at Geraghty who saved easy. 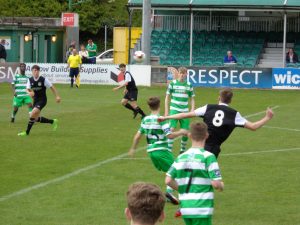 Jake Ellis found himself clean through on the right on 16 minutes but blasted over the bar. Conor Grant’s shot for the visitors on 27 minutes grazed the top of the cross bar.

The home side had a let off on 32 minutes after Alex Nevin gave away the ball but Jack Kelly could only fire over the bar. A minutes later, Nevin had to be alert to dive low to save a cross generic form of synthroid from the right from Kelly. The visitors took the lead on 35 minutes. Kelly’s low cross from the right was turned in by Rhys Murphy.

The closest the home side came to an equalizer was on 79 minutes when Sean O’Brien fired over from a free kick.