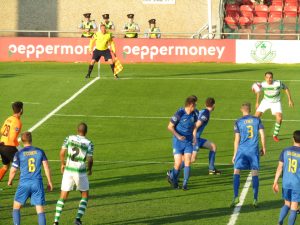 Martin Russell took charge of his first game as Bray Wanderers new head coach. Wanderers made one change to the starting line up from the victory over St. Patrick’s Athletic the week previous. Ronan Coughlan returned from suspension in place of Ger Pender who dropped to the bench. Rhys Gorman returned to the bench after a spell out with injury.

Wanderers played for all but three minutes of this game with ten men after Conor Kenna was sent off for handball on the line. New Ireland international Graham Burke scored twice, and Sam Bone, Dan Carr and Dave McAllister also found the net in an easy win for Rovers. 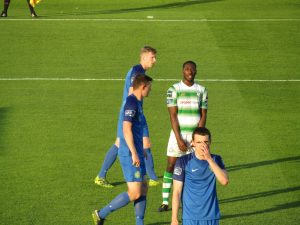 Burke opened the scoring on 4 minutes from the penalty spot after Kenna handled on the line. Wanderers ten men held out for the remaining minutes of the first half. Eventually Rovers made the extra man tell as Wanderers faded in the second half in the warm weather. Gary McCabe limped off after 52 minutes. A minute later, Rovers added a second when Sam Bone scored low past Moran.

Burke fired home the third from the edge of the area on 75 minutes. Dan Carr tapped in the fourth at the back post on 83 minutes before David McAllister fired a long range shot past Moran on 86 minutes to complete the rout. 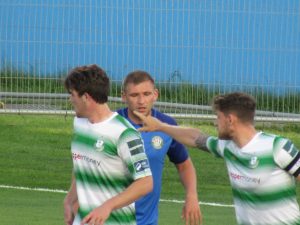