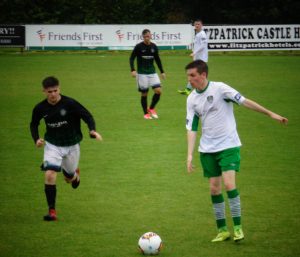 Wanderers ended this game with nine men after defenders Dylan O’Connor and Calvin Rogers both received straight red cards in the second half.

Ronan O’Kelly went close for the home side on ten minutes, forcing Doyle into a save after the keeper spilled an initial shot. Three minutes later, Cabinteely took the lead. Andre broke free down the right and crossed to O’Kelly who scored low into the corner.

Following a Cabinteely corner on 20 minutes, Wanderers broke free and Jamie Aherne ran to the edge of the area but fired just over the crossbar. 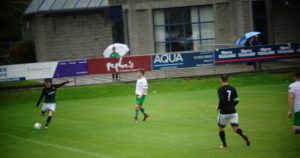 Wanderers equalized on 27 minutes. Gilshenan played in Aherne and he scored low into the right corner through a crown of defenders.

Wanderers jot was short lived as the home side restored their lead three minutes later through former Wanderers under 19 player Avis Ganiyu.

Two minutes into the second half Aherne fired over from long range. The home side went close on 55 minutes when Andre’s header came back off the crossbar. Andre scored the third goal on 61 minutes, heading home from close range. 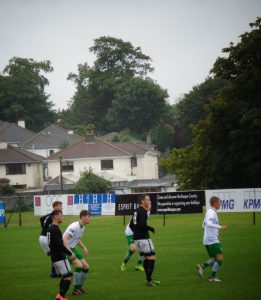 Wanderers were reduced to nine men on 82 minutes when Calvin Rogers received a straight red card for a bad foul.