Wanderers were forced into a late change when goalkeeper Malachy Doyle dislocated a finger in the warm up. Ryan Brown was promoted from the bench with Nathan Wolohan coming onto the substitutes bench.

Jamie Aherne had the first shot on goal after ten minutes but fired too high. Shane Heffernan headed just over the bar from Gavin Howard’s cross on 25 minutes with only the goalkeeper to beat. A minute later, Heffernan forced Farrell into making a great save.

On 29 minutes Ryan Browne’s clearance was blocked down outside of his area and Craig Canty scored for the visitors with the keeper stranded. A minute before the break Wanderers were reduced to ten men. Kieran Butler, who was earlier booked in the 13th minute, received a second yellow for bringing down Cian Lynch. 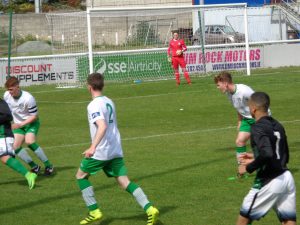 Cabinteely had a chance to double their lead on 62 minutes but Jordan Andre blasted a penalty over the bar. Ronan Smith then hit the post for the visitors. Andre made amends for his penalty miss by adding a second for the visitors on 78 minutes. He cut in from the left and beat a couple of defenders before firing past Browne.

Wanderers had late efforts on goal through Whelan, Gilshenan and Broderick but Farrell was equal to anything thrown at him.