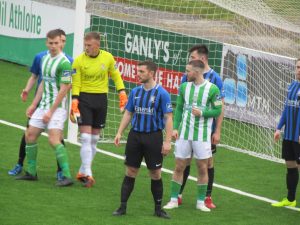 Wanderers made four changes to the starting line up from the team that were defeated in Limerick a fortnight ago. Sean Heaney, Philip Gannon, Richard Purdy and Joe Doyle all started in place of Darragh Gibbons, Hugh Douglas, Derek Daly and Jake Ellis.

Bray started this game very well. Within a minute of kick off, Dylan McGlade’s shot was deflected out for a corner with Myles beaten. Joe Doyle broke free down the right on three minutes and he lobed the stranded Myles but his effort went inches wide. The breakthrough arrived on eight minutes. Athlone failed to clear the ball from their area and Dylan Barnett poked home through a crowd of players for his first league goal for Wanderers.

On 14 minutes, Philip Gannon set up Joe Doyle and he fired low past Myles for Wanderers second. Athlone were reduced to ten men when their captain Darren Meenan was shown a straight red card for a high tackle on Dylan Barnett. 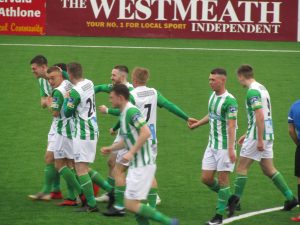 Dean Casey went on a good run down the Athlone left and fired a shot just over Sava’s crossbar on 23 minutes. Wanderers were awarded a penalty on 28 minutes after Sean Heaney was pushed over in the area following a Wanderers corner. Dylan McGlade’s spot kick was too close to Myles and he saved easily with Athlone clearing for a corner. From the resulting corner, Heaney headed home the third at the back post. Richie Purdy went close on 39 minutes, poking his effort inches outside the Athlone post.

Wanderers eased off in the second half with their mind on an upcoming busy run of fixtures (four upcoming games within 12 days). Jake Ellis scored the fourth goal on 79 minutes, tapping in a rebound off the post from close range. Derek Daly completed the rout on 86 minutes following a Wanderers break which ended with Ellis playing in Daly on the left and he duly fired home.