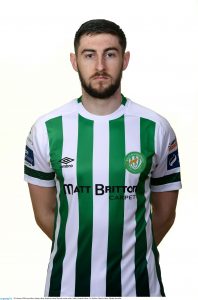 Aaron played for Arklow Town in the Leinster Senior League before going to England and Sheffield United’s academy. He spent six months on loan at Scottish side Dumbarton in 2013 where he made 18 league appearance in the Scottish Championship. He returned home to Ireland in 2014 and signed for Derry City. He made 104 league appearances for the Candystripes and scored three times in his four seasons at the Brandywell. He also played in the 2014 FAI Cup Final, which Derry lost 2-0 to St Patrick’s Athletic.