Bray Wanderers under 14s lifted Bray’s first national underage trophy for a Bray Academy side with this win over Shelbourne.

Patrick Manning’s shot on five minutes required a save from Ireland under 15 goalkeeper Joe Collins in the Bray goal. Wanderers responded immediately when Mason Melia set up Darragh Emmett for a great chance. Shelbourne’s Dan Ring crossed from the left just past the quarter hour, but the inrushing William Smith couldn’t direct his shot on goal. Minutes later, Smith crossed again from the left only for Cian Corboy to head over.

Bray took the lead on 25 minutes when Ray Conroy turned the ball into his own net from a right-wing cross. Jack Nolan fired a long-range free kick over the bar just past the half hour mark. James Lonergan’s snapshot from the edge of the area forced Kearney into a save. Bray increased their lead on 37 minutes when Barry Kealy headed home from a Lonergan corner on the left. On the stroke of half time Darragh Emmett blazed a shot over the bar from close range.

Emmett fired a shot against the post on 46 minutes as Wanderers tried to finish off the game. Shelbourne responded and Sebastien Fravega forced Collins into a save moments later. Collins was forced to touch a low shot from Mosneagu around the post on 56 minutes. Darragh Emmet’s shot was palmed over the bar by Kearney. 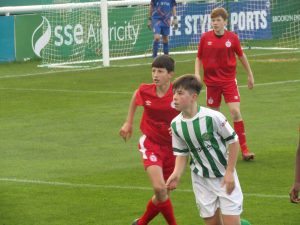 Kavanagh strike sinks Galway in play offStalemate in Play off