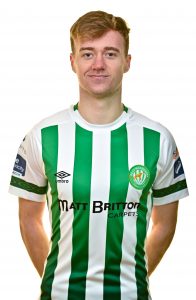 Andrew is on loan with Bray Wanderers from Dundalk.

Andrew played schoolboy football with Home Farm before moving to Dundalk and he played with the Dundalk’s U17 side in 2018. He made his debut and only league appearance for Dundalk in the 0-4 home defeat to Shamrock Rovers in September 2020.

Andrew joined Bray Wanderers in February 2021 and made his debut in the opening game of the season at home to Treaty United.

He played for Ireland schoolboys in their 2-1 win over Australia in January 2020 in Whitehall. Andrew was called up to the Republic of Ireland under 18 squad in 2020 and also to an under 19 training camp last month.