Bray Wanderers meet Athlone Town at the Carlisle Grounds on Monday, 7 September. Due to Covid restrictions the match will be played with no spectators allowed into the ground on the evening.

Bray Wanderers recorded their biggest league win of the season with a 3-0 win over top of the table Cabinteely last Friday. Wanderers extended their current unbeaten home league run to ten games and have not conceded a home league goal in their five home games this season. Bottom of the table, Athlone Town have failed to win any of their nine league games to date having recorded just two draws to date.

Peter Withe (pronounced ‘With’) was a footballer I held in high regard growing up. He was a striker and helped Nottingham Forest to the First Division title, then did the same with Aston Villa. He also scored the winning goal in the 1982 European Cup Final for Villa against Bayern Munich, and played for England a dozen times.

Withe had a list of clubs as long as your arm. Before settling at Villa for the entirety of the first half of the 1980s, he’d gone through nine different clubs, spending at most a couple of seasons in any one place. If you were following his career, you’d have been forced to ask “Who’s Withe with now?!”.

Having been born in Liverpool, Withe started out with local side Southport, then a Football League club. The 1970s also saw him play in the Football League with Barrow, Birmingham City, Newcastle United, Wolverhampton Wanderers and Forest, with sojourns oversees with Arcadia Shepherds, Port Elizabeth City (both South Africa) and Portland Timbers (in the US).

Withe’s time in Portland saw him become a cult hero with their fans. He netted 17 goals and provided 7 assists in 22 games as Timbers made their way to Soccer Bowl ’75 (Timbers lost the decider 2-0 to Tampa Bay Rowdies). His heading ability saw him nicknamed ‘The Wizard of Nod’ and his return to England saw him sign with Wolves as he started to draw the attention of higher-league clubs.

Withe was a tall, powerful, old-style centre-forward. With his light scrubby beard and pioneering wearing of club-colour wrist sweatbands, he was instantly recognisable. He could hold the ball up, and when paired with a sharp, quick-strike partner, formed a deadly strike-force (at Forest he had Tony Woodcock, and at Villa he had Gary Shaw).

Another highlight of Withe’s career was winning the ‘Golden Boot’ (shared with Tottenham Hotspur’s Steve Archibald) in 1980-81 when he netted 20 times in 36 First Division games, helping Aston Villa to the title. His inclusion in the 1982 England World Cup Finals squad saw him become the first Villa player ever to achieve this distinction. His post-Villa career saw him play for Sheffield United and Huddersfield Town.

Withe went into coaching and management after his playing career ended. His fondness for travelling was also rekindled, and he has worked mostly in South-East Asia in the intervening decades, including spells managing the national teams of Thailand and Indonesia.

Withe has a younger brother, Christopher, who was also a professional footballer. He was with Bradford City at the time of the horrific fire at Valley Parade in 1985, when 56 fans lost their lives at a game against Lincoln City. He also played for Newcastle United, Notts County, Bury, Chester City, Mansfield Town, Shrewsbury Town and Boston United. Like his older brother, that’s a lot of clubs – another case of “Who’s Withe with?!”.

After a great win in the El DARTico on Friday, let’s hope we can keep the momentum going on Monday night against Athlone Town.

What’s on the telly?

Judging by the to-ing and fro-ing by the Government over reopening pubs and sports events, it is now highly improbable that normal crowds will be allowed to attend League of Ireland matches any time during the remainder of the current reduced season.

In fact, it is now unlikely that any fan attendance at all will be permitted, even for the FAI Cup final!

Perhaps the most beneficial effect of this gloomy outlook is that it has put an end, for this season at least, to the interminable social media chatter about gates, actual or prospective, which usually wind up as boasting matches between regular participants on-line.

On the other hand, the change that could have the longest-lasting effect is the impetus the closed doors policy has given to clubs which had long moaned about the lack of TV coverage of the League.

The FAI’s move in generating WatchLOI, for the benefit of the Premier Division, but with the First Division clubs to share in the income, was announced in typically bungling fashion, with acrimony bursting out over what seemed like a draconian edict that the games selected for WatchLOI were the only ones permitted to be live-streamed.

The further implications for Premier games were clearly not foreseen until the live streams had been in operation for a couple of weeks.  The fact that the FAI had to launch a ‘Half Season Pass’ within weeks of the original launch of WatchLOI indicates that the vaunted ‘so-many games for only this many Euro’ had overlooked the inconvenient fact that many of the games were on the same evenings at the same time.

Now, the sacred Saturday afternoon soccer which survived in England until the birth of the Premier League had been fatally undermined in Ireland by the establishment of the FAI, which had not particular objection to playing games on the Sabbath.  As early as the mid-1920s, a significant proportion of League of Ireland matches, not to mention the lower tiers of the game, were being played on Sundays, so that isn’t an issue.

But we had kind of got used to the idea that most games were played on Friday nights, and in marketing terms that was a major plus.  Until television came along (or in our case didn’t, until now) and the FAI realised that to market WatchLOI effectively they had to break the Friday night model.

So a further revision of the already revised Premier fixtures was issued last week. And with the exception of the last round of games, the remaining weeks sprawl over each weekend, games on Fridays, Saturdays and Sundays, all for the benefit of WatchLOI, which isn’t even real broadcasting.

You can imagine what the First Division clubs thought when that service was first announced: “We’re supposed to encourage our fans to watch PD games?  Well, be damned to that!” (or words to the same effect).

Pretty soon, a couple of FD clubs were rumoured to be going ahead with their own streaming, for their own fans, and let WatchLOI go hang.  The rest of the fans held their collective breath, waiting to see what sanction would be handed down by Abbotstown for this mutiny.

And then nothing happened. 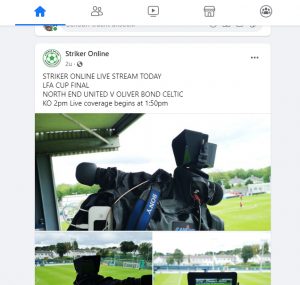 But the trickle of TV streams has grown and threatens to become a flood: Striker is now in the mix, streaming high profile Junior games. There’s posh for the Sunday Leagues.

Shamrock Rovers, who of course are already included in the FAI’s scheme, decided not to stream their First Division encounters, in deference to Abbotstown’s initial ban on such local initiatives.

But as for the other First Division clubs, I understand Cobh were to join the streamers last week, using YouTube as their platform, with Bray, Drogheda, Galway and Wexford already in play, some using both Facebook and YouTube.

Most seem to be using Facebook pages for the live streams, and single camera coverage for the games.  It’s a work in progress, as I noted one evening when several viewers mentioned the lack of a running score on screen, and asked that an elapsed time clock be added to the transmission of one club’s fixture.  The data had been added to the screen by the time the second half got under way.

The stream involves a real-time delay of up to 15 or 20 seconds, which could be a boon in certain circumstances for those in the Press Box who might need to check who got the last touch in a goal-mouth melee, or whether a hand-ball or red-card foul really occurred (second-guessing the officials, and potentially adding to the chorus of voices demanding video assistance for referees) – but it’s a danger, too: if you’re busy checking the action from fifteen seconds ago, you may miss the current action, and a lot can happen on a football pitch in fifteen seconds!

But however it develops, this is not TV.  Part of the reason clubs and fans were constantly agitating for more or better TV coverage of the domestic game was to encourage greater attendance at matches. To that end, people who wouldn’t normally see League of Ireland football would get that opportunity because the matches would be broadcast.

What has been growing in recent weeks is a system which provides that games can be seen by those who wish to see them, those who know the facility is available, the people with Internet access (remember, it may beWorld Wide but it’s still not universal) and who can’t currently attend matches.

That description applies to WatchLOI as well, by the way.  Neither is doing anything to spread the gospel among the uninformed, and neither will reach any of the thousands who already watch the long-established website TV of the big beasts of the English Premier – not to mention those whose soccer is primarily consumed from Match of the Day and its equivalents.

Live TV on websites can best be described as “narrowcasting”: it is a service for those who want it, those who already support the domestic game, but as propaganda it is preaching to the converted.

None of this is to cast aspersions on the new facility.  It is what it is, and is very welcome.  Think of the hundreds, if not thousands, of Bray supporters who have emigrated over the years and who lost any real contact with the club, the team and the game.  They can now have a positive connection with the Carlisle Grounds, at the tips of their fingers.

Another innovation is the publication, on line, of material that would normally be used for match-day programmes.  At least two First Division clubs, Drogheda and Bray, are doing this, and Drogheda have made their articles and features available as a download.

It seemed like a good idea when it was first mooted, and no doubt there are many people who will read what’s published, but it could also lead to a radical re-thinking of the range and type of material that’s most suitable for on line publishing in this manner.

Skills involving on-line layout and design could be required above and beyond those that have been painstakingly developed by club volunteers over the decades.  The current pamphlet circulated by Bohemians locally to celebrate their anniversary, and now available on-line, is a good example of what can be done.  (Happy Birthday, Gypsies, by the way: It’s today, 6 September!)

There could also be implications for clubs’ own match reports.  The routine post-match interviews (both text and video) which some clubs had already been posting on social media and websites long before the pandemic, and which in turn are an imitation of the trimmings added by broadcasters to their live coverage of sports events, could become a regular part of their on-line services.

That would be a useful addition to the limited traditional media coverage of the game, perhaps especially for the second tier clubs, but again it suffers from the major limitation of on-line live streaming: it is narrowcasting.

This is indeed a brave new world, and many things that were inconceivable before will become normal, or even required, after the pandemic.  Not least of them the way we attend and view our favourite game.

Wanderers up to second in tableWanderers defeat league leaders Cabinteely