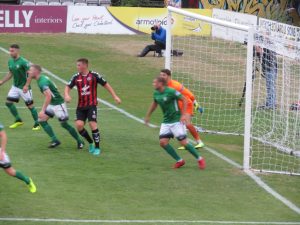 Wanderers suffered their 13th consecutive away league defeat with this heavy defeat in Dalymount Park.
Former Wanderer Dan Kelly opened the scoring on five minutes when he latched onto a backward header from Rhys Gorman to fire low past Moran. Kelly doubled the lead on the 22nd minute when he curled home after Moran had saved in a goal mouth scramble.
Four minutes later, Dylan Hayes bunded Ward in the area and Dinny Corcoran converted the resulting penalty On 42 minutes, Kevin Devaney fired home the fourth from long range.
Rob Cornwall added the fifth on 50 minutes following a Ward corner. Bohemians were awarded their second penalty of the game after Lyons was brought down by Moran. Moran made amends with a brilliant penalty save from Corcorcan. Cristian Magerusan completed the scoring in the 80th minute with a well taken header.

SJ.B Academy week end round up 22.07.2018Statement from Bray Wanderers