Bray do U14 double over UCD 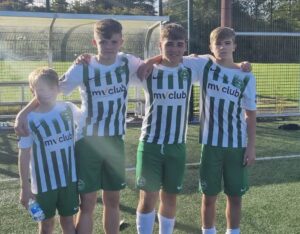 A superb team display coupled with a wonder strike by Billy Martin saw Bray do an U14 EA Sports National Underage League Tier 2 Phase 2 Group D double over UCD.
But despite the success at Marley Park on Saturday afternoon, Wanderers had to settle for a runners-up spot behind Group winners Shelbourne.
The young Seagulls has defeated the Students 2-1 at Ballycorus last month to clinch a Quarter Final berth in the Shield.
The Green and White’s needed to win again – and hope Shels did not defeat Wexford FC at the same time at Ferrycarrig Park. But the Dubliner’s won 5-0 to pip the Wicklow outfit to pole position by a single point over the six matches.
In the second meeting of the two clubs in just eight days, UCD started the brighter and found themselves ahead in the 15th minute with a fine strike from the right hand side of the net by Brian Okanume.
But after that, the visitors turned on the style, and played themselves back into the game with man of the match Jake Fulton being the driving force in midfield.
However, they were unlucky to not equalise before the end of the first third – with a series of good chances that were not taken which included a missed penalty.
That all changed eight minutes into the second third.
After tidy footwork by Martin, Bray were awarded a second spot-kick of the contest that was dispatched by Josh Delves low in off the right hand post.
The tie was turned on its head ten minutes later. From Delves corner from the right flank left footed, defender Noah Byrne scored with a towering header six yards out that went in by grazing the underside of the crossbar.
Wanderers made 3-1 before the hour mark with a goal of the season contender.
After a Billy O’Neill lay-off with a chested pass, Martin – in his stride – lofted a sublime 30-yard left-footed half volleyed lob that stunningly dropped to the net
With both clubs continuing to play eye catching football into the final period of 30 minutes, it was the Seasiders who would have the final say with a great team goal.
With possession won in the middle of the park, August overall U14 player of the month Billy O’Neill cut in off the left wing. His right-footed fiercely hit shot nestled into the top right hand corner of the net.