Going in 2-0 to the good after the first 45 minutes on Saturday afternoon at Ballycorus, the Seagulls struck four more times to ease past Carlow/Kilkenny in their final home fixture in the section.

Soon after, Shamrock Rovers defeated Shelbourne 3-1 at the AUL Complex.

The two results mean that Rovers top the table on 22 points with one game remaining (with a goal difference of +26).

Bray play Rovers next Saturday (May 28) at the Roadstone Academy.

A win for the Hoops will see them claim pole position. They will finish at least second if they draw.

That is depending on Shels result away to Wexford FC at Ferrycarrig Park.

Victory could see the Reds claim top spot. Or second at the very least.

A win for Bray will guarantee runners-up. But they could win the Group if Shels do not beat Wexford.

Having needed an injury time winner go to defeat Carlow/Kilkenny 1-0 back in April in the reverse fixture at Dermidus Park, the hosts needed just 45 SECONDS to equal that record.

Some fine passing from the tip off, Max Mason burst past a defender on the left of the box to square for Eoghan O’Hanlon to bundle in from close range.

For virtually the rest of the period, Wanderers missed a series of gilt edged chances to add to their tally.

It wasn’t until the 43rd minute that the second score arrived.

Mx Hennessy’s cross-field pass wide right found Daniel Lee. His centre picked out Jake Murray to hook in a volley at the near upright.

The second period was just eight minutes old when it became 3-0. From Joshua Kerr’s corner, Daniel Chukwu challenged. He reacted to the loose ball and blasted to the roof of the net.

Murray turned provider in the 67th minute to release substitute Conor O’Gorman to slot in the fourth.

It became 5-0 with a quarter of an hour remaining. Lee and Hennessy linked off the right wing. Murray then threaded a pass into the left channel for Zach Nolan to squeeze in an effort from a tight angle.

Sub Lewis Jacobs wrapped up matters in the first minute of stoppage time when he converted after good work between Lee and O’Gorman. 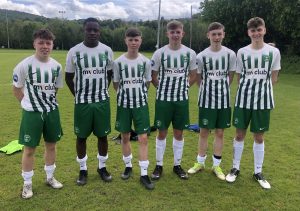