Home / News / Bray Wanderers Fantasy Football Update – Week 11
With the Bray Wanderers season over, the players seem to have been putting their new spare time into their Fantasy Football teams, if November’s leaderboard is anything to go by! Hughie Douglas is just a point behind top scorer Iain Collins, and in addition to Darragh Noone and Daniel Blackbyrne in the top ten, Alan McNally and Drew Lewis are in the top 15. November is a short month, with just two more game weeks to go to decide who wins the €30 voucher for the club shop.
Meanwhile, in the overall leaderboard, it’s a serious battle at the top, with S ON taking over from Kevin Bennett this week to regain the lead he had after game week 8.
A reminder to our two October winners – Kevin Bennett and Ross Whyte – to get in touch with us here and we’ll arrange your prizes!
In the meantime, there’s no action this coming week due to the international break, and when we resume for game week 12, we’ll also be having round 2 of the cup. 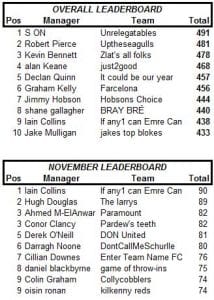