Dan Gorman caught up with Bray Wanderers goalkeeper Brian Maher after his man of the match performance against Galway United at the Carlisle Grounds last night. 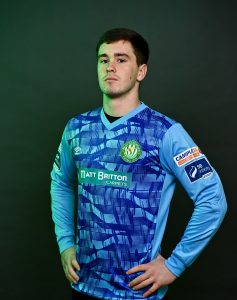 Brian Maher is hoping to keep off pulling saves for Bray Wanderers in order to save his spot with the Republic of Ireland U-21s.

The shot-stopper racked up his eighth clean sheet of the season against Galway United – including a stunning late stop – to keep Bray locked in fifth spot in the First Division. Maher knows how important that point could prove to be and his fantastic last-ditch save secured that point as Maher – having already committed to a dive – threw out his left hand to repel a shot that had taken a late deflection.

‘Both of us are in the play-off spots at the moment and it’s just about – if you can’t win; don’t lose. I think we showed a lot of good things tonight in the way we defended as well as we did lay a few punches on them but I think that game was always going to be decided by one goal. Of course we wanted to win but we’ll take the 0-0.’

And what about that save?

‘It was just one of them; you don’t even get time to think about it. I thought it was going to go along the ground and he’s stuck his foot out and it’s come off him and it’s just instinctive – it’s the kind of thing that you do every day in training. You don’t get a chance to think; you just hope your hand gets up to save it!’

Maher is quick to share the praise with his team-mates. He has two fantastic shields in front of him in the form of Aaron Barry and Andrew Quinn.

‘It’s great. There’s that mix of Az (Aaron Barry) with his experience and Andy is obviously younger and I’m kind of in the middle. We all help each other! Az probably helps the two of us mostly but it’s great to play with Aaron especially because of the experience he gives you and he’s a good captain. The two of them are working well together and as a back five, we’re working well together. I think we’ve got eight clean sheets now which is not the worst. It’s something we need to build on and of course we need to start putting in goals at the other end and keep clean sheets and we’ll get the wins.’

Next stop for Maher will be a return to Inchicore to face old club St. Patrick’s Athletic. He is looking forward to the challenge and will present him with another opportunity to impress the Ireland U-21 management team.

‘It’s an interesting draw. It’ll be good for us to test ourselves against a team that’s doing really well in the Prem this year.  They’ve got really good players and I’ve a lot of friends up there that I would’ve spoke to during the week. It’s a nice stadium and there’ll be lots of fans at it so bring it on.

‘It’s something I’ve always wanted as a kid was to play for Ireland. I’ve got a few caps from U-15’s and all the way up and 21’s is definitely where I want to be right now. I think I’ve got four caps now for the U-21’s and we’ve a lot of games coming up towards the end of the year so hopefully I can keep my performances up for Bray and keep myself in that squad.’

Wanderers hit for six by St. PatsWanderers and Galway share the spoils