DIRECTIONS TO THE CARLISLE GROUNDS

From Dublin: Take the N11 out of Dublin or M50 Southbound.

Exit the M50/N11 merge at junction 5 Bray North. At roundabout take second exit towards Bray. Continue straight on along the Dublin Road, cross the Dargle bridge and turn left at the lights just beyond the Royal Hotel. Continue down Quinnsboro Road. The Carlisle is on your left just before the level crossing.

DUBLIN BUS numbers 145 from Dublin City Centre, 84 (from Blackrock) or 45A from Dun Laoghaire.

Routes 84 & 45A both go to Bray DART station which is beside the Ground. Route 145 stops in Bray Main Street which is a short walk to the Ground.

Home fans are accommodated on the main covered stand on the Town side of the ground.

Away fans are accommodated on the Railway Side which is uncovered.

Hot Food is available from mobile catering vans inside the ground.

Sweet Shop located inside the ground.

“Events” means any event taking place at The Carlisle Grounds

7.1 Racial, homophobic or discriminatory abuse, chanting or harassment, or any such banners or flags, is strictly forbidden and will result in arrest and/or ejection from the Ground. BWFC may impose a ban from the Ground as a result.

8.1 The throwing of any object within the Ground without lawful authority or excuse.

8.2 The chanting of anything of an indecent or racialist nature.

8.3 The entry onto the playing area or any adjacent area to which spectators ere not generally admitted without lawful authority or excuse.

8.4 Attempting to enter the Ground or being inside the Ground whilst drunk;

8.5 Being in possession of any intoxicating liquor, or can or other portable container and which could cause damage or personal injury, when entering the Ground or in public area of the Ground from which the event can be directly viewed. 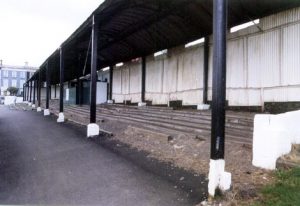 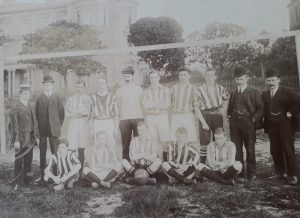 The Carlisle Grounds can claim to be the League of Ireland League ground with the longest history as a sports venue. Opened in 1862 as the Bray Athletic Ground, it was renamed the Carlisle Cricket and Archery Ground later that year, in honour of the 7th Earl of Carlisle who performed the opening ceremony in his capacity as Lord Lieutenant of Ireland. The name was popularly abbreviated to The Carlisle Grounds as early as 1870.

The previous names point to some of the sports it hosted. In addition, there was an indoor roller-skating rink between 1876 and 1880, which was quite an unusual facility. The ground hosted flower shows, croquet and firework displays, often as commercial ventures, but all part of the effort to bring visitors to Bray. Outside, on Seymour road, as well as beside the train station, hackney carriages stood for hire to tour the surrounding countryside.

The Carlisle Grounds was designed by William Dargan a leading engineer William Dargan. Dargan (1799-1867) designed the Esplanade as well as several buildings in Bray, including the International Hotel, which was opposite the Grounds until it was destroyed by fire in 1974. He was the driving force behind many developments. He financed an industrial exhibition in the grounds of Leinster House, and is a hero to all trainspotters as the main engineer behind Ireland’s rail network. Dargan was a patron of the National Gallery, and for this and other achievements he is commemorated by a statue outside the National Gallery in Kildare street, Dublin.

The first World War memorial which is just outside the wall was built in 1929. Many changes have been made to the Grounds in recent years. The playing surface is excellent and well-maintained. New seating was installed on the railway side of the ground in 1999. Early in 2001, Bray Urban District Council granted a 35-year lease in the Grounds to Bray Wanderers FC. The grass bank behind the goals was removed in 2016.

But most of the remainder of the venue dates from 1929, and is due to the efforts of the then resident club, Bray Unknowns. They had played a few seasons at the Carlisle Grounds around 1910. The club re-formed after the first World War and joined the League of Ireland in 1924, playing on the outskirts of Bray. In 1929 they moved back to the Carlisle and carried out substantial changes to the ground in preparation for their return. Unknowns built the main perimeter wall at Quinsborough road as well as the terracing and roof over the old stand (usually called the Shed). They re-laid the playing pitch and railed it off.

The pitch was subsequently re-laid on several occasions. For example, when Transport brought League of Ireland football back to the ground, many CIE staff from Bray and Dublin volunteered to work on the pitch. It’s said that the excellent pitch drainage derives from the use of railway cinders as a base for the pitch at that time!

The first League of Ireland match at the ground in the 1929/30 season was a 2-2 draw between Unknowns and Dundalk. Fred Rogers opened the scoring for Unknowns, William Murray and John Aitken scored for Dundalk, and Johnny Payne equalised. Unknowns lined out: Dunne, Daly, Ebbs, Kane, Mainey, Fennell, Lally, Hogan, Rogers, Payne, Blackford. The referee was a Mr Nicholson, from Wrexham. A big crowd attended.

Bray Wanderers played their first League of Ireland game in September 1985 in the grounds.

Bray Wanderers re-built and strengthened parts of the wall in 1997-99 as part of the plan to improve access to and safety in the ground. They installed new turnstiles on Quinsborough road at the seafront corner and blocked up the old turnstiles along the same wall. A new stand seating 985 was constructed in 2006 bring the seating capacity of the ground up to about 2,000 with an overall capacity of 3,000. The perimeter wall was removed and replaced in 2016.

Rugby League Ireland played against Belgium in an international friendly on Sunday 12 July 2015 winning the match 34-0. They have used the grounds to host Ireland International games since.

The Carlisle Grounds was used in the filming of the Bloody Sunday scene in the 1996 film Michael Collins. 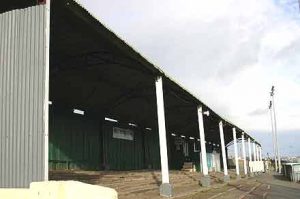 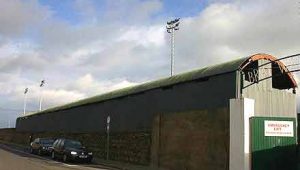 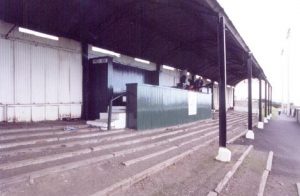 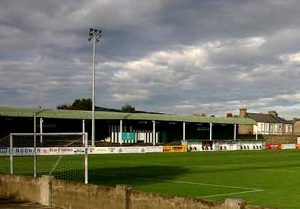 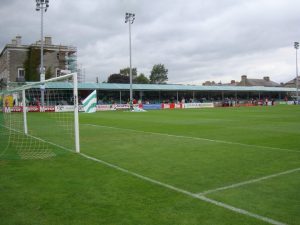