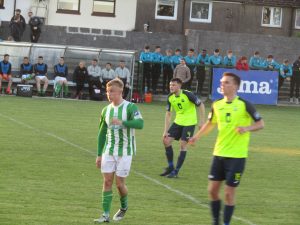 Wanderers three match league winning run came to an end with this defeat to Cobh Ramblers.

David Hurley fired over the bar for the home side after just four minutes. Hurley went close again on 17 minutes following a good move from Ramblers. Wanderers responded and Dean O’Halloran forced Hunt into a save from a header following a cross from Dylan Barnett on 18 minutes.

Dylan McGlade went on a good run on the right and shot into the side netting. McGlade then got through on the left following a good run which forced Hunt into another save. Sava made a good save on 41 minutes from Turner after a good move on the right from the home side. 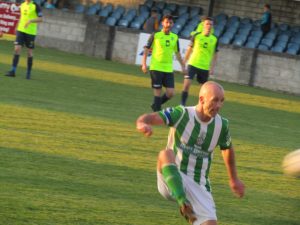 Wanderers started the second half on top and forced a number of chances. Derek Daly’s shot from the right hit the post and McGlade then forced Hunt into making another save. Hugh Douglas saw his header hit the crossbar on 50 minutes following a McGlade corner on the left.

The home side took the lead on 57 minutes. Sava was unable to hold a shot and Ian Turner was on hand to fire the rebound to the net. Hugh Douglas moved to an advance position as Wanderers searched for an equaliser in the closing stages. Hunt was forced into another save from Douglas in the final minute as the home side held on for victory. 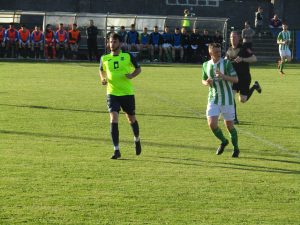