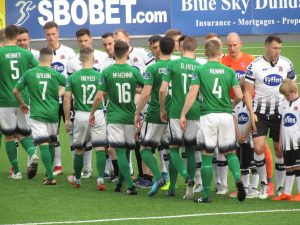 In a top v. bottom game Dundalk made it six wins on the trot while Wanderers suffered their tenth successive away league defeat since an opening day point at Oriel Park.

Dundalk went in front on 13 minutes. Daniel Cleary ran clear down the right and his cross was headed home by Hoban from close range. Two minutes later, ex-Wanderers Dylan Connolly struck a second from the edge of the area. 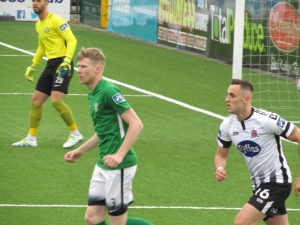 Bray’s gamble to play Gary McCabe only lasted 27 minutes and he was replaced by Andrew McGovern. Dundalk added a third on 39 minutes when Duffy’s volley off a Hoare cross was saved brilliantly by Evan Moran but McGrath tapped home from close range.

Wanderers lost Dylan Hayes at half time as the defender pulled up with a hamstring injury which is likely to keep him out for a few weeks. Moldavian under 19 international Dragos Mamaliga replaced Hayes for his debut.

Hoban headed his second and Dundalk’s fourth on 61 minutes. The fifth arrived on 76 minutes when Marco Tagbajumi scored. On 85 minutes Bray’s Andrew McGovern suffered a suspected broken leg after accidently colliding with his own player Sean Heaney. The game was stopped for seven minutes while McGovern was taken away by ambulance.

The game resumed in a low key finish as both sets of players were clearly shaken by McGovern’s injury.