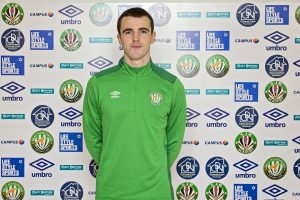 Darragh played underage football for Templeogue United where he won seven Dublin and District Schoolboy League (DDSL) Premier titles along with 2 All Ireland titles. He also secured Kennedy Cup honours in 2012 with DDSL and represented the Leinster FA youths team in 2015.

He was capped twice at under 17 International level for the Republic of Ireland in two friendly games against Croatia In Zagreb in February 2015. Ireland played the games in preparation of the UEFA U17 Championships Elite Qualifying matches. Darragh played the full 90 minutes as Ireland were defeated 4-3 in the first game, having recovered from been 4-0 down at one stage. Two days later, he appeared as a 65th minute substitute in a 2-1 defeat to the same opposition.

Darragh joined Shamrock Rovers under 19 team for the 2014/15 season. He made his first competitive appearance for Shamrock Rovers first team in a Leinster Senior Cup tie away to Kilkenny side Thomastown United in February 2017, a game in which the Hoops suffered a 1-0 defeat.

He joined Bray Wanderers in January 2018. Having made his debut in the Leinster senior cup defeat to St. Patrick’s Athletic he picked up an injury and was side lined for a number of weeks. He eventually made his league debut in May 2018 away to Cork City at Turners Cross. He scored his first goal for the club in the 3-1 win over St. Patrick’s Athletic on 1st June 2018..