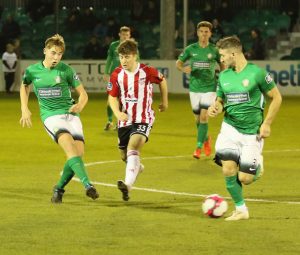 Gary Cronin earned his first win as Bray Wanderers manager as Wanderers produced one of their best displays of the season in the final home game of the season at the Carlisle Grounds. John Sullivan headed home a winner three minutes into stoppage time as Wanderers came from behind to end a 10 game losing sequence.

John Sullivan fired just wide on five minutes in the first chance of the game. Shane McNamee’s shot on 14 minutes forced Conor Kenna into heading clear. A minute later, Aidy Delap disposed Sean Heaney and crossed for Dean Shiels to score. Wanderers almost equalised on 23 minutes when Jake Ellis’s shot was cleared off the line by Jamie McDonagh. Wanderers were level three minutes later. Kevin Lynch’s free kick on the right was headed powerfully home by Sean Heaney. Evan Moran produced a great save on 40 minutes to deny McNamee. On the stroke of half time Paul O’Conor had to be alert to clear off the Bray line with Moran beaten. .

Moran was forced into making a number of saves in the second half to deny the visitors. Wanderers pressed for a winner in the closing stages. Jamie Crilly drove over with just three minutes remaining. Sean Harding forced Grimes into tipping over his free kick in injury time. From Jake Kelly’s resulting corner Sullivan headed home for a dramatic winner for the Seagulls. 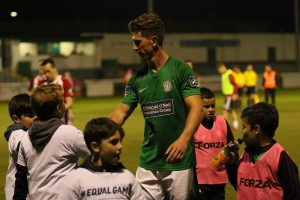