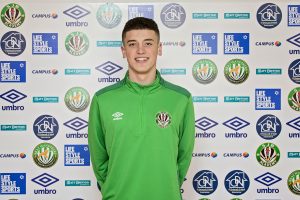 Dragos played for Longford Town under 17s in 2017 where he was captain and he also picked up the under 17 player of the year that season with Longford.

Dragos has been capped at international level for Moldova at under 18 and under 19 level when he played in a game against Romania in October 2017.

He joined Bray Wanderers under 19 team for the 2018 season. He joined the senior panel in May 2018 and he made his debut for the first team in a premier division game away to Dundalk on 25th May 2018.