Wanderers made two changes to the starting X1 from the team that drew in Sligo in mid-week. Kevin Lynch returned at left back with Karl Moore moving into midfield.to replace Ger Pender and Darragh Noone replaced Mark Salmon in midfield.

The visitors started the better and were almost gifted an early goal on eight minutes. A mix up between Peter Cherrie and Conor Kenna gifted the ball to Mulhall. His shot was blocked on the line by Kenna and came back to him. Kenna was forced to block on the line again.

Drogheda went close again when Mulhall fired narrowly wide of the left-hand post. On the half hour mark, a good Bray move resulted in Kane blocking a Ryan Brennan shot for a corner.

On 36 minutes, Gary McCabe’s free kick forced McGuinness into making a save. A minute later, Wanderers took the lead. Kevin Lynch’s corner was headed home by Hugh Douglas. On the stroke of half time Mulhall’s free kick for Drogheda came back off the post.

Wanderers doubled their lead four minutes into the second half. McCabe was brought down on the edge of the box. Aaron Greene curled the resultant free kick over the ball into the top left corner, with McGuinness rooted to his line.

Drogheda pulled a goal back on 67 minutes. A free kick broke loose in the Bray area and fell to Mulhall who scored. A melee then erupted in the aftermath of the goal as Cherrie held onto the ball. Cherrie and

In the final minute of stoppage time, Drogheda almost equalised from a corner. Byrne’s inswinging corner was headed over by Elworthy. 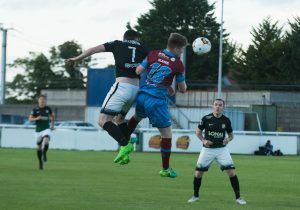