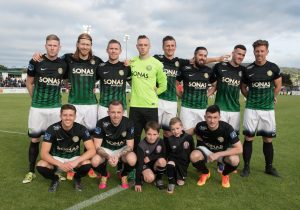 Wanderers were behind after just two minutes following a Dundalk counter-attack resulting from a Bray corner. Patrick McEleney raced clear and fed Robbie Benson who rounded the advancing Cherrie to score.

Dundalk doubled their lead on the half hour. Jamie McGrath fed Benson and he played a one-two with Shields before firing past Cherrie for his second of the night.

Bray’s best chance of the game came on 36 minutes when Mark Salmon’s shot from outside the box forced Rogers into saving with the ball eventually cleared for a corner.

Dundalk sealed their win on 63 minutes. McEleney picked up the ball outside the area and chipped it over Cherrie