For the first time, there was no new entrants to the top 9 in the Bray Wanderers fantasy football – it’s just jockeying for position at this stage, with the top three even staying in the same order as last week, with Alan Keane’s aptly-named “just2good” in the lead ahead of Robert Pierce’s “Uptheseagulls” and Kevin Bennett’s “Zlat’s all folks”.

An excellent score of 84 saw James Lawless’ “Fánaithe CM” jump from 28th to 10th, and he’s also up to 11th in the December standings.   With just two gameweeks to go in the month, October winner Ross Whyte again leads the way and is on course to win a second club shop voucher.

The Christmas action – mostly on St Stephen’s Day – doubles up as the last 16 of the Cup, and with preparations getting underway for the 2017 Bray Wanderers season on the pitch, so the Cup is starting to close in the final, where a 2017 Bray season ticket is up for grabs. 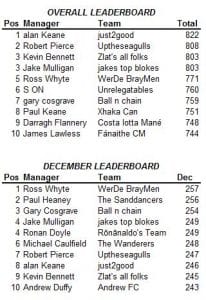