Two weeks in to a bumper December, and the monthly leaderboard is as static as the overall one.   No fewer than six of the December top ten in last week’s table have retained their places in the top ten this month, though Ross Whyte’s WerDe Bray Men has taken over the lead in the race for the December shop voucher.   His solid score of 64 in Gameweek 15 also lifted him up to sixth in the overall table, but also put him through to the last 16 of the Cup, with a comfortable 64-34 win over Richard Fox, one of two remaining Cup players left from outside the top 100 in the league.   The other, Paddy generic equivalent to synthroid Gormley, also lost, leaving Ruben Collins as the lowest-ranked player left in the Cup; he’s 90th in the league.   Ross will play the club’s web editor, Mick Duffy, in the last 16.

Club coach Graham Kelly had a poor week, dropping out of the top ten, and only outscoring two of the 32 players left in the Cup – fortunately for him, one of those was his opponent, centre-back Hugh Douglas, and so Graham marches on, while goalkeeper Lee Steacy is the only player now left in the draw.

Gameweek 18 is the week set aside for the next round of Cup matches – for everyone else, Gameweek 16 is a midweek round, and is already underway! 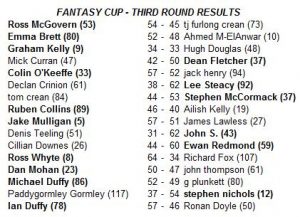 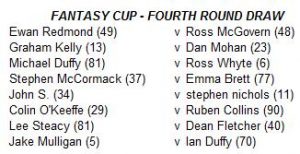 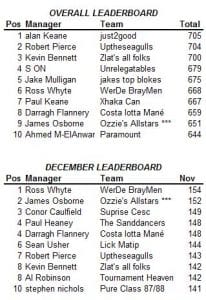