John Thompson is the February winner of a €30 voucher for the Bray Wanderers club shop after his almost all-Irish defence – including former LoI stars Stephen Ward and Séamus Coleman – helped him to a solid 70 in last week’s action, giving him a 13-point winning margin over Kevin Lawlor at the month’s end.

The month also lifts him up 18 places to 25th in the overall leaderboard, which is still dominated by Alan Keane – his lead at the top is now approaching unassailable, at 62 points.   It is the biggest gap anywhere on the leaderboard, does generic synthroid pill look like except for at the bottom, where Elaine C’s Soaring Seagulls are only doing so if the table is upside down – she’s 99 points adrift of the club’s media officer, Jillian Godsil, at the foot of the table.

March is another short month – just three weeks – and at the end of that, we’ll have another €30 voucher to give away. 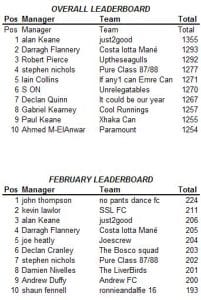