Home / News / Fantasy Football Update
It’s as you were at the top of the Bray Fantasy Football League after Gameweek 13.   The top three have changed places with each other – Alan Keane takes over the lead – while fourth and fifth stay the same.   The big movement was lower down the table, where Ronan Doyle’s massive score of 97 – including a contribution of 42 points from triple captain Alexis Sanchez – saw him ranked 265th out of 4,156,186 players in the entire competition, and lifted him from 102nd place up to 59th in the Bray table.   So congrats Ronan!
Ahmed M-ElAnwar is the winner of the November €30 voucher for the club shop, after holding off a late charge from Alan McNally.
Meanwhile, in the three Cup replays, the results were –
Lee Steacy 59-28 Ger Sheehan
Richard Fox 55-26 Declan Murphy
James Osborne 58-60 Mick Curran
December is a bumper festive month of action, with six Gameweeks in total. Two of these – Gameweeks 15 and 18 – will be Cup weekends, which will whittle the draw down from the last 32 to the last 8. 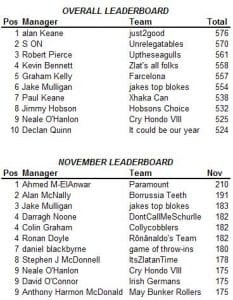