Two weeks after the highest-scoring round of the tournament so far, and gameweek 23 was the lowest-scoring round.   This meant little change at the top – including in the monthly competition, where Darragh Flannery has taken the €30 club shop voucher for January.   His score of 45 was only 5 points off the high score of the week – midfielder Mark Salmon’s 50 – but it did see him keep ahead of nearest challenger Keith Ryan in the race for the club voucher.   A new competition starts this weekend!

Meanwhile, the two Cup semi-finals were both nail-biting affairs, each ultimately decided by a single point.   Dan Mohan will take on Ewan Redmond in next week’s final (gameweek 25); Dan beat Ruben Collins 33-32, while Ewan accounted for Stephen Nichols 35-34.   We’ll have a bit of a build-up to the Cup final in the next week – but the best of luck to both players as they aim for two season tickets for Bray’s 2017 season! 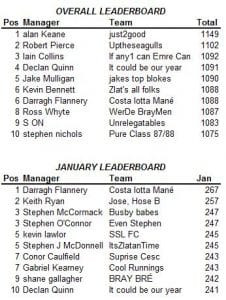