Home / News / Fantasy Football Update
It’s all change at the top in the Bray Fantasy Football league!   With just nine gameweeks to go, Alan Keane has been knocked off the top spot for the first time in four months after Stephen Nichols picked up an unprecedented two top-score weeks in a row, and a 50 point deficit is suddenly a 20 point lead.   This week, he joined the select few to have hit a hundred points for a week – along with Alan Keane (week 10), Paul Heaney (week 14), Declan Quinn (week 21) and Stadium Director Declan Cranley (week 24).   A triple captain score helped this week – as did the fact generic synthroid issues that his captain was Lukaku; 48 points from one player is always a good start!   Dawson and Heaton also hit double figures, but Kané and Mirallas didn’t score at all, so the 104 points was achieved with just 9 players.
Not surprisingly, the top score in two of the three weeks in March also means that Stephen has comfortably walked away with our €30 shop voucher for best manager of the month.   As always, prizes can be claimed by contacting us through the various social media; and as always, there’s a new voucher up for grabs as we start into a new month! 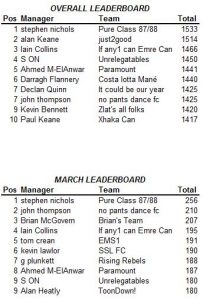