It’s getting very tight at the top in our Fantasy Football competition – in fact, with three weeks to go, there’s only a single point between our top two, Stephen Nichols and Alan Keane.   The two have been swapping the lead over the past few weeks, with Stephen out-scoring Alan by 24 points last week to re-take top spot by the narrowest of margins.   For so long, Alan had looked untouchable, but now we’ve got a real ding-dong of a title race on our hands!

The penultimate one of our club shop vouchers was also generic synthroid names decided at the weekend, with Kevin Bennett pipping centre-half Hugh Douglas, who had led the month after week 35.   Hopefully it’s some consolation for Kevin, who is currently third in the overall standings, but too far adrift of the top two to challenge for a new Bray Wanderers jersey!

So we’re into the final stretch of the season – three more weeks remain to decide everything.   A new month and one final voucher for everyone to challenge for in our May competition, and ultimate glory for those at the top. 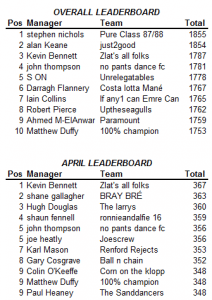