Week 21 was the highest-scoring gameweek in the competition yet, with an average score of 60 points, but Alan Keane retains his lead despite a perfectly average score of, well, 60.   None of his nearest challengers made any sort of move for the top, however, all of which allowed Declan Quinn to storm into the top ten after scoring 113 last week, the highest single gameweek score we’ve had so far.   A hat-trick for captain Harry Kane was worth 34 points, which alone was more than 11 other teams scored last week!

Two other players hit the ton last week – only Alan Keane had done so all tournament, scoring 100 points exactly in week 10.   Keith Ryan also had Kane as captain, but Darragh Flannery’s 107 was arguably the more impressive given Kane wasn’t his captain, and he also had Gareth McAuley in defence, who got booked, conceded four goals and scored an own goal for a haul of -3 points.

In the Cup, meanwhile, two big upsets as both the top players – Ross Whyte and Jake Mulligan – were dumped out at the quarter-final stage.   However, their conquerors – Stephen Nichols and Dan Mohan respectively – are now the ones who have big rankings advantages in the next round of a competition which has seen so many upsets.   Stephen will play Ewan Redmond in the first semi – Ewan accounted for the last first-team player left in the draw, Lee Steacy – while Dan faces Ruben Collins.   Those ties will take place in week 23.   Best of luck to all! 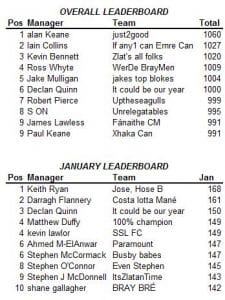 Sponsor a Bray player for 2017 seasonClub Shop open on Saturday