S ON is the first player to retain his lead at the top of the weekly leaderboard after a low-scoring week in the club’s Fantasy Football competition. Behind him, Robert Pierce remains in second, while third and fourth swapped places, as did fifth and sixth as the competition starts to get a bit spread out 12 weeks in.

In a low-scoring week, Ahmed M-ElAnwar’s 72 points was the best anyone could muster, but while it lifted him from 59th to 27th in one go, it didn’t trouble the top ten. However, it did lift him from third to first in the November leaderboard, ahead of a chasing pack including first-teamers Darragh Noone and Hugh Douglas, U-19 manager Graham Kelly, Finance Officer Kevin Burke and Media Officer Stephen McDonnell – the club’s best showing all season! And although 12 points is a solid lead, it’s by no means insurmountable, even with just one Gameweek remaining this month to win the €30 voucher for the club shop.

It was another week of upsets in the Cup competition – the third round draw contains more players ranked outside the top 100 than ranked in the top 10. Although the two high-profile is generic synthroid just as good underdogs from round 1 – Charlie Day and Conor O’Sullivan – both bowed out, the four biggest mismatches in this round all ended in wins for the underdog. Two of the top ten were among the casualties – Jack Henry (ranked 98th) accounted for Robert Pierce (ranked 2nd) on a score of 49-45, while Declan Quinn (5th) was dumped out by tj furlong crean (87th) 36-33. Meanwhile, the luck of the draw pitted the week’s top scorer (Ahmed M-ElAnwar) against the week’s lowest scorer (Peter Duffy), resulting in a massive 72-11 win for the former.

Hugh Douglas beat the club’s kitman Stephen McGuire, and his reward is another derby in the third round, against U-19 manager Graham Kelly, now the highest-ranked played left in the competition. Three matches ended in draws and will go to replays in Gameweek 13, including the game between Ger Sheehan and reserve goalkeeper Lee Steacy – now the only other first-team player left in the competition.

The numbers in brackets indicate the player’s position, either before Gameweek 12 (for the Second Round results) or after it (for the Third Round draw)

Round 3 will take place in Gameweek 15. 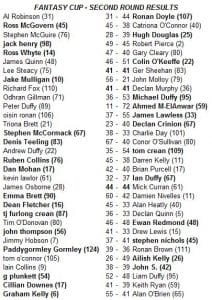 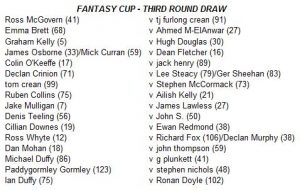