Home / News / Fantasy Football – Week 14 Update
The longest month in our Fantasy Football competition is underway – and Paul Heaney has started off December in flying style, picking up a competition record 106 points in the week.   Captain Alexis Sanchez got a hat-trick, but there were goals as well for Diego Costa, Eden Hazard, Jermaine Defoe and Jonny Evans – all of which lifts Paul up from 104th up to 57th, and top of the December pile.
Behind him, Darragh Flannery and Conor Caulfield fell just short of the ton, but 99 points apiece was enough to make the jump to the serious end of the table, generic of synthroid does it work with the two rising to 7th and 12th respectively.
In the overall table, meanwhile, Alan Keane and Kevin Bennett have broken away from the pack slightly – but the 24 points gap they currently have is easily made up in one good week.
This weekend sees the last 32 of the Cup as well – so plenty to play for! 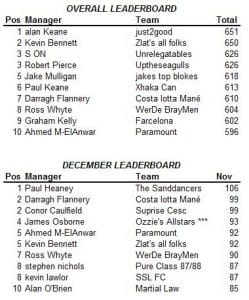