Home / News / Fantasy Football Week 18 Update
Although Alan Keane still holds the lead in the Bray Wanderers Fantasy Football – though his lead has been cut to 8 points – Ross Whyte is the form player at the moment.   One of our two October winners of a €30 voucher for the club shop, he’s a point clear of Gary Cosgrave in the December leaderboard going into the final gameweek of the month, and is also in the running for a league and Cup double after beating the club’s web editor, Michael Duffy, 74-71 in a high-scoring round of 16 tie – gameweek 18 was the second highest-scoring week we’ve had yet.
With coach Graham Kelly also getting knocked out, the only club representative left in the last 8 is keeper Lee Steacy.   The quarter-final draw has kept the two remaining big guns apart, Jake Mulligan and Ross Whyte (second and fourth in the overall table respectively), but both face tricky ties when week 21 comes around if they want to keep in the hunt for 2 2017 season tickets. 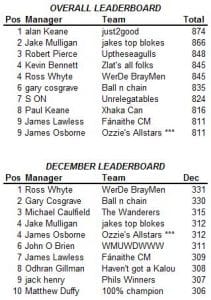