Home / News / Fantasy Football Week 19 Update
Ross Whyte is the first ever double winner in the Bray Wanderers Fantasy Football, after winning the December €30 Bray Wanderers shop voucher to add to the one he won in October.   He held off a late charge from Iain Collins, whose brilliant score of 96 ranked in the top 750 scores across the entire 4,000,000+ players in the overall tournament, but left him 3 points adrift of Ross at the end of December.   The one consolation is that he’s two places ahead in the overall table, but Alan Keane’s Just2Good side is beginning to pull away, and now has a 18 point gap at the top; Alan has been in the top 5,000 – the top 0.1% – in the overall competition for the past 8 weeks.
For those just outside the top 0.1% – never fear!   We’re resetting the monthly scores to nil again, and the top scorer over the next four weeks will win the next of the club’s €30 shop voucher. 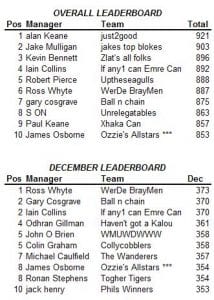