Home / News / Fantasy Football Week 20 Update
It’s only just gone past half-way, but Alan Keane is starting to pull out a bit of a gap at the top of the Bray Wanderers Fantasy Football competition.   He’s the first to hit 1,000 points for the season, and did so with a score of 79 in midweek, which puts him top of the early January leaderboard.   Despite only ten of his players scoring points, two assists, a goal and a 3-point bonus from captain Olivier Giroud gave him more points than four other teams alone!
But with scores re-setting each month, generic synthroid rash every player is in with a new chance of winning something.   Richard Fox, Patrick Killian and Dillon Maguire – all started the month outside the top 100, and yet all are in the top ten in the January leaderboard, just ten points off Alan Keane.   But can they last the pace over the next three weeks?   Time will tell!
There’s a break this week for the FA Cup; the next set of league games are on Saturday week, which will double up as the Cup quarter-final. 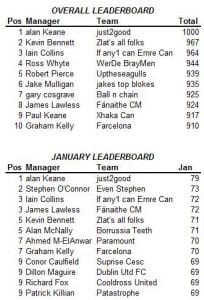