Dan Mohan is the winner of the 2017 Bray Wanderers Fantasy Cup after a nail-biting and high-scoring final against Ewan Redmond at the weekend.   Only 15 of our 126 players managed to beat Ewan’s 66 points in Gameweek 25 – but unfortunately for him, his Cup Final opponent Dan was one of them, notching 70 to claim two 2017 Bray Wanderers season tickets.   The rules at the start of the season didn’t say anything about runner-up prizes – first is first and second is nowhere as they say – but to lose a final after a score of 66 certainly deserves a shop voucher, which we’ll arrange.

It sees the end of 7 rounds of Cup action – six for Dan, who got a bye into round 2.   Both players scraped through their second round tie by just 2 points, and along the way accounted for club coach Graham Kelly and keeper Lee Steacy.   Both had very similar teams out last week as well – both played a 3-4-3 formation, both had Alexis Sanchez as captain – 30 points – while Lukaku, Defoe and McAuley were also on both teams.   In the end, the decisive position was the third forward; Boro’s Christian Struani only scored 2 for Ewan’s team, while Dan could bank an assist from Zlatan Ibrahimovic.

We’d ask both players to get in touch with us here so we can arrange your prizes.

And for now, it’s back to the league – and can anyone reign in Alan Keane’s 56 point advantage? 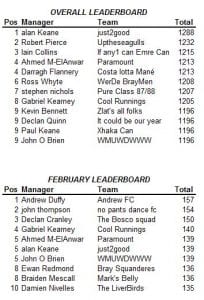