Just when it looked like Alan Keane was walking away with our Fantasy Football competition, along comes the FA Cup to liven everything up.   Last weeks’ FA Cup quarter-finals meant there was only four games in the Premier League, and plenty of zeroes across the various teamsheets.   Alan had five zeroes but still picked up an above-average 28 points.   Behind him, however, Stephen Nichols had four blanks, but had Lukaku as captain (24 points) alongside Hull’s Oumar Niasse (2 goals – 12 points) up front, while in midfield Joshua King (a hat-trick for Bournemouth – 18 points), Kevin Mirallas (a goal for Everton – 10 points) and Gylfi Sigurdsson (man of the match and a clean sheet – 7 points) chipped in as well.   All told, he gained 45 points at the top of the table, to close the gap down to just 4 points – and it’s very generic synthroid pill identifier much game on again.

Spare a thought for Conor Clancy though – only one of his starting XI actually had a game last week, and even then, Bournemouth’s Lewis Grabban wasn’t around for it as he’s joined Reading on loan.   So Conor picks up our first big fat zero…   That said, 14 players scored 5 points or fewer, so he’s in good company!

This weekend sees March end early – the last weekend is an international weekend – and so not only has Stephen Nichols made up huge ground in the overall table, he’s also clear at the top of the monthly table, with just one week to hang on to claim the latest €30 voucher for the Bray Wanderers club shop. 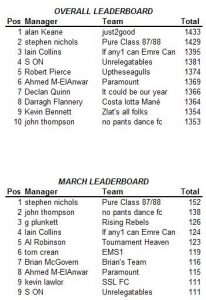