Alan Keane is the 2016/17 Bray Wanderers Fantasy Football champion after a topsy-turvy title race with Stephen Nichols which went almost to the wire.   The decisive week was week 37, the highest-scoring week of the entire competition with a number of back-games – Alan’s score of 151 was 24 more than Stephen could pick up, and in the final standings, Alan held a 23-point lead after 34 weeks of play.

That weekly score of 151 was one of the biggest, though not quite the biggest, gameweek score ovre the whole competition.  That particular honour went to Gabriel Kearney, who racked up 186 points after transfer deductions in week 37, even with Manolo Gabbiadini scoring 0 in a double week for missing a penalty in his only appearance, which kept Etienne Capoue’s 9 points stuck on the bench.   Gabriel’s top scorers were captain Sanchez (54), Kane (31), Azpilicueta (20), Jesus (19) and de Bruyne is generic synthroid the same (15), and it pushed him up to fourth in the final standings.

Gabriel also ended up third in the May standings, but was pipped to the final club voucher by Paul Keane, who notched 354 points in the month.   Paul’s 184 points in week 37 included a massive 81 for Sanchez, with a particularly timely play of his triple captain card!

Top of the playing and coaching squad was Graham Kelly, who came 39th overall; Hugh Douglas in 70th was the top Bray Wanderers player in the final standings.

As usual, we’d ask all prize winners to get in touch to arrange their prizes. Alan wins a Bray Wanderers home jersey while Stephen win’s a Bray Wanderers away jersey. While Paul Keane wins the monthly prize of a €30 voucher for the club shop.

Thanks to all for playing, and hopefully we’ll be back with more prizes to be won next (English) season! 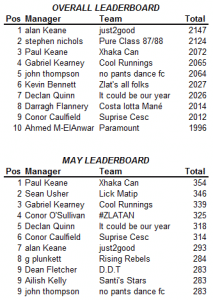