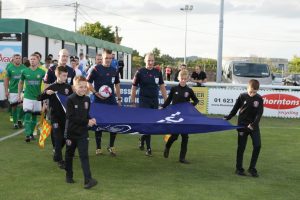 New manager Gary Cronin saw his side exit the FAI cup at the first round stage. Byron O’Gorman started his first game while Paul O’Conor and Sean Heaney returned to the starting team.

Harps improves after the break and equalised through Sam Todd on 64 minutes. On 73 minutes, Byron O’Gorman ran clear but Gallagher came out and blocked the strikers shot.