This game marked Bray Wanderers 1,000th league game in the League of Ireland. Wanderers made one change to the starting eleven that drew with St. Pat’s the previous week. Karl Moore came in for his first league start of the season to replace the suspended Jason Marks at left full back. 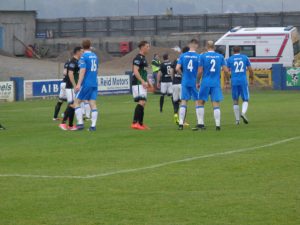 The visitors had the perfect start when Gary McCabe volleyed home from outside the box on six minutes for his 12th league goal of the season. The home side then forced three successive corners, the third of which saw Mark Salmon block a goalbound shot on the line and Damien McNulty’s follow-up was deflected wide.

Just past the half hour, Gareth Harkin found himself clear on goal but Cherrie denied him with a save. Five minutes before half-time, the Seagulls doubled their lead when Ryan Brennan found space outside the area and fired in off the right-hand post.

On the stroke of half time Ciaran O’Connor received a yellow card for a bad foul on John Sullivan. The on-loan Dundalk striker was lucky to only see yellow. Sullivan hobbled off, with, what looked like a nasty injury, to be replaced by Anto Flood. 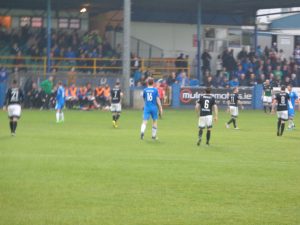 The home side threatened from a few free kicks in the second half but the Bray defence were equal to anything Harps threw at them. Anto Flood shot straight at Gallagher with a well-struck shot, mid-way through the half.

On 79 minutes Aaron Greene picked up the ball in his own half and as Wanderers broke away in numbers he ran straight down the middle, outpacing Ciaran Coll in the Harps defence and shooting low under Gallagher. 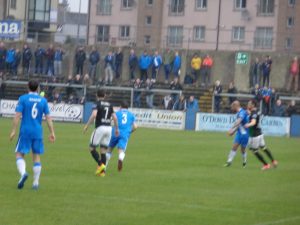