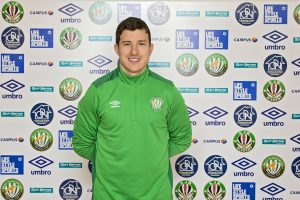 Gabriel was born in Rome but grew up in Romania. He moved to Drogheda Town as a teenager and then Drogheda United. He joined Bray Wanderers in 2008 but failed to make a first team appearance. He returned to Drogheda United for the 2009 season. The following season he joined Monaghan United and helped the club to promotion in 2011. He made 33 league appearances for Monaghan over three seasons. He returned to Drogheda United for 2012 & 2013 seasons, making 50 league appearances in that spell and winning the League cup. He moved to Dundalk in 2014 where he won 4 premier division titles, 2 FAI cups, 2 league cups and the Leinster senior cup. He was named in the starting line-up for Dundalk’s Europa League group stage tie at home to Zenit in November 2016, a game the Lilywhites narrowly lost 2-1.