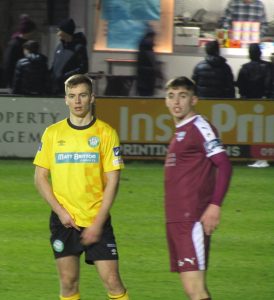 Wanderers made it three league wins and four successive wins in all competitions from the start of the season with this win over Galway United.

Wanderers made one change to the starting team from their last league outing with Richard Purdy coming into central midfield in place of the injured Philip Gannon.

Bray started well and had plenty of possession in the opening minutes before the home side responded with some dangerous attacks. A free kick for the visitors on 19 minutes saw McGlade play in O’Halloran on the right and his cross was caught by Werner as Purdy was set to meet it. McGlade did well on the left on 25 minutes, breaking through, but his shot from a tight angle was saved by Werner. Three minutes later, Purdy failed to connect properly with a cross and the Galway defence cleared off the line. Sean Heaney then forced the home keeper into another save with a header. Five minutes before the break Wanderers should have taken the lead. Luke Nolan’s cross from the right was just missed by the in running Purdy.

Two minutes into the second half Sava made a great save to deny Colin Kelly after he had broken free down the left. Just before the hour mark Dylan Barnett’s shot was well saved by Werner. McGlade’s dangerous drive, on 65 minutes, from outside the area was deflected away for a corner. Five minutes later, McGlade’s shot was saved by Werner for a corner. McGlade took the resulting corner and Dean O’Halloran stole in at the back post to fired home from close range.

Galway were reduced to long range efforts on Sava’s goal in the closing stages but never really troubled the keeper with any of them. Sava has now kept three clean sheets from three league games this season.