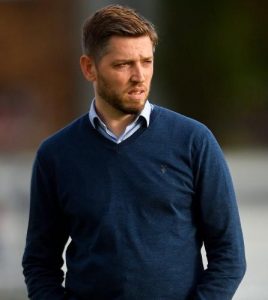 Bray Wanderers FC are delighted to announce the appointment of Gary Cronin as their first-team manager with immediate effect.

Gary, a graduate of the FAI’s most recent UEFA pro-licence course, will take his first post as a full-time, permanent manager having gained valuable experience during his eight years as assistant and caretaker manager at Longford Town.

The 39-year-old is extremely excited at the opportunity to work under the new ownership structure at the Seagulls, sharing their vision of creating a sustainable football club that the people of Bray and County Wicklow are proud of.

He takes charge of his first training session this evening and will be in the dug-out for Friday night’s FAI Cup second round tie against Finn Harps at the Carlisle Grounds.

Bray Wanderers FC would like to place on record their gratitude to Graham Kelly, who assumed control for a second time this season in trying circumstances.

“Having finished a long and enjoyable spell with Longford Town at the end of last season, this was exactly the type of fresh challenge I was seeking,” said Gary.

“I was very encouraged by the meetings held in recent days with the club’s likeminded new owners, Niall and Tim O’Driscoll, and the work begins straight away.

“My firm belief that our communal target of building a football club, rather than merely a first-team, is achievable, especially with the progress in the Academy,
Which is very exciting?

“I’m fully aware we take on this journey together in a realistic manner and this isn’t a quick-fix. However, despite the challenges this season on and off the pitch, I am driven by the project we’re building and positive about a brighter future.

“In that regard, I am delighted with the latest initiatives to involve fans in the new venture.

“As a former Bray Wanderers player, I’m well aware of how passionate the supporters are, so getting those fans back to the Carlisle Grounds, and adding new ones of all ages, will be crucial to our progress.”

Club Chairman Niall O’Driscoll was thrilled to enlist the club’s No 1 target for the post.

“Gary is an ideal fit for what we’re aiming to accomplish at Bray Wanderers FC,” he said. “Our objective is not just to help develop young players but also coaches.

“Gary’s combination of ambition, qualifications and people skills were evident during our discussions and we believe he is the right person to lead the club on our journey.

“Given his career path has involved signing for Middlesbrough from a schoolboy club in his teens, returning to the League of Ireland as player and then coach, he is perfectly placed to impart his knowledge on our squad.

“It is a stated aim that our first-team, though not exclusively, will be developed upon a nucleus of graduates from the St Joseph’s/Bray Academy as well as top quality players to achieve the clubs objective to compete at the highest level.”