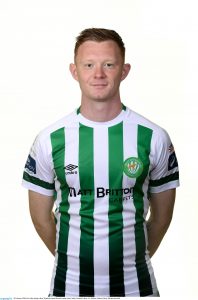 Gary played underage football with Newbridge Town before joining the schoolboy ranks at Shamrock Rovers. He returned to Newbridge in the Autumn of 2009.

In August 2010 he joined Bray Wanderers and he scored three goals in 11 league and cup appearances. The following year he was hit by an injury and he only made 7 league appearances, scoring once.

Gary moved to Shamrock Rovers in 2016 where he scored 19 league goals in six goals from 78 league appearances over three seasons. He played in both of the club’s Europa League ties against Finnish side RoPS.

He signed with St Patrick’s Athletic for the 2019 season where he made 29 league appearances and scored once in the league for the Saints. Gary returned to Bray Wanderers in November 2019 ahead of the 2020 season.