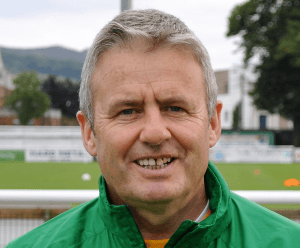 Harry was capped for the Irish schoolboys at U15, U17 and youths level. He started his League of Ireland career as a player with Shamrock Rovers in September 1978. He won the Shamrock Rovers Player of the Year award in 1980/81. In 1982 Harry spent 6 months at Vancouver Whitecaps 1991 He joined Drogheda United where he played for two seasons before retiring.

Harry’s first foray into management came with his local junior team, Kinvara Boys F.C., who were then playing in the Athletic Union League Premier A Division. He managed the Navan Road outfit from the 1994/95 season until the end of the 1996/97 season. He managed Phoenix F.C.in the Leinster Senior League and the Republic of Ireland women’s national under-17 football team.