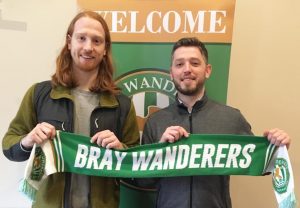 Dan Gorman from the Bray People caught up with Hughie Douglas this week !
It was a dream for Hugh Douglas to commit to Bray Wanderers again after an injury nightmare.
The hometown hero suffered a horrendous knee injury which ruled out of action since May 2018 but is approaching full fitness again having put pen to paper on a fresh deal with the Seagulls on Tuesday.
Douglas has seen the good, the bad and the ugly in his time at the Carlisle Grounds but now all he is seeing is the light at the end of the tunnel as his injury hell draws to a close and a First Division campaign nears.
“I’m extremely happy to continue my time with Bray, now that’s it’s done, I can fully focus on continuing my rehab and being able to enjoy my Christmas with my family”
“At first, it’s a whole bag of emotions. You get angry with yourself, asking ‘was there anything I could have done different?’ in the lead-up to the injury. But then you accept it and rebuild yourself back up. It can be difficult in the gym constantly by yourself doing the exercises and fitness program, but I’m very lucky that I have a close family and an excellent physiotherapist who supported me through the tough days up until this point.”
The Co. Wicklow club learned that they’ll kick off their new season against Cabinteely and Douglas hopes to be in contention for Gary Cronin’s starting XI that evening. Douglas admits that he’s been impressed thus far with the new Bray boss.
“Six to eight weeks hopefully until full fitness, it’s been a journey to say the least since it happened in early May. It’s not as straightforward as people might think, I’ve days where I was really down, you have set backs along the way but I’ve kept saying to myself it will be worth in the long run when I step back on to the pitch.
“Gary has been great to me, I’ve still yet to play a match under him but throughout my injury he has kept in touch me either pulling me aside at training or for a chat or over the phone.”
There will be a lot of new faces in the dressing room for Douglas in 2019 and he has given the new signings a thumbs-up as he hopes Wanderers can launch a mission to return to the top flight for 2020.
“There has been a good mix of experience and youth brought into the club so far, including re-signing a handful of the lads from last year’s squad. Hopefully Gary will continue to bring quality into the club as he has been doing.
“The team is going through a transition at the moment, with so many coming and going. I’ve no doubt that the team will be very competitive next season. All we need to do is take it one game at a time and build on each performance. I’m sure if do that, we’ll be in hunt for promotion this coming season.”
Manager Cronin will be crossing his fingers that Douglas’ predictions come through. The 39-year old is delighted to have secured the services of Douglas for another year and is looking forward to welcoming him back onto the pitch.
“I’m delighted to have Hughie signed back. I believe it’s important to have that local connection and it’s obvious from the reaction of the Bray supporters that Hughie is well-liked at the club. I also know it means a lot to Hughie that Bray Wanderers are successful and he wants to do all he can to get us back to Premier football.
“But more importantly I worked hard to get Hughie signed back because he’s a top defender with a lot of Premier football experience. What he will give us on the pitch will be invaluable I’m sure. He is a professional and always looking to improve. I know his professional attitude will be infectious in the group.
“Last season was difficult for all involved but when a player sustains a long-term injury keeping him off the pitch, then it’s even more difficult. Hughie has been relentless with his rehab and has been determined to come back from his injury even stronger. I believe he will come back stronger and we can see Hughie back playing soon. I’m sure our supporters are looking forward to Hughie’s first game back and watching him perform for the team again.
“It’s a massive signing for the club.”