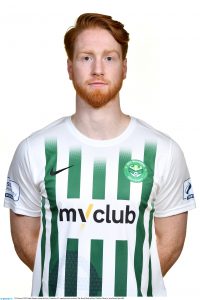 Hugh joined UCD from Belvedere, where he had won the FAI Under-17 All Ireland. He has represented his country at U21 level, and was in the Ireland International Schools squad where he was named Player Of The Year in 2011.
He signed for Bray in December 2014. Supporters club Player of the month for May and August 2015. He was the Player of the year and Young player of the year in 2015. Hugh made 130 appearances in all competitions for Bray between 2015 and 2019.

In November 2019, Hugh signed with Drogheda United where he won the First division title in 2020. Hugh made 18 appearances for Drogheda in his two seasons there. He returned to Bray Wanderers for the 2022 season and is the club captain.