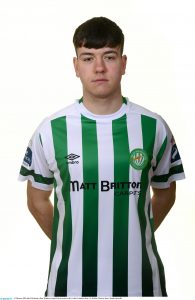 Jake is a striker for the Bray Wanderers/St. Joseph’s boys under 17 Academy team. He was Bray Wanderers youngest ever player in the League of Ireland when he made his first team debut in August 2017. Jake was aged 16 years, five months and four days on his debut.

Jake was capped at under 17 level for the Republic of Ireland U17’s against Azerbaijan in the UEFA Championship qualifying stage in Bulgaria in October 2017.