Bray Wanderers FC are pleased to announce that Karl Moore has re-signed for the 2017 season.

Harry Kenny has moved quickly to secure the midfielder who made 36 appearances for the Seagulls during the 2016 season and scored 3 goals synthroid generic name and use following his arrival from Bohemian FC in January 2016.

Moore adds to the growing list of players who have re-signed for the club from the 2016 squad. 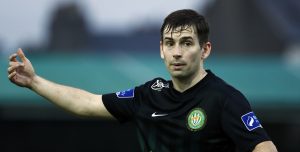